Beer was banned in Iceland for more than 70 years. The beer ban was regularly disputed, but it wasn’t lifted until March 1, 1989 – referred to as Beer Day.

The reasons for the prohibition of beer can be traced back to the year 1915, the year in which a general alcohol prohibition came into effect in Iceland. This was the result of a national referendum in 1908, when 60% of Icelanders voted in favor of banning alcohol. This outcome reflected the spirit of the age, and what was happening in the rest of the world. In Western countries, abstinence movements were in rapid growth, and soon became very influential, not least in the political field.

WINE ALLOWED BECAUSE OF FISH EXPORT

The general prohibition was in order until 1922, when due to commercial interests, Iceland’s parliament (Alþingi) voted to allow an exception: the sale of Spanish wine. That way, there was no risk of losing fish export trade to Spain, which was vital to the economy. 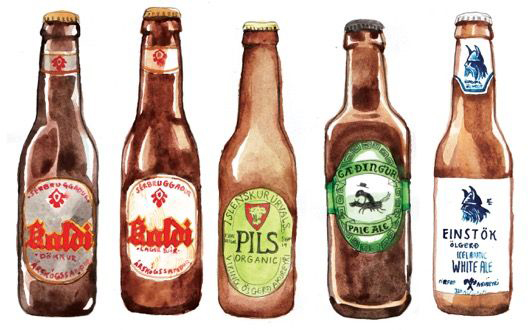 Eleven years later, in 1933, another step was taken away from prohibition, allowing sales and importation of alcohol, except beer. But why not beer? A simple answer to that question doesn’t exist. However, some claimed that beer would increase the nation’s alcoholic consumption, especially amongst young people. Others didn’t want to spend currency on foreign ale. During the prohibition period, many measures were taken. One of them was the infamous faux beer, a mix of strong liqueur and Pilsner, an alcohol-free beer.

The beer ban was regularly disputed, but it wasn’t lifted until the year 1989. From March 1st, five beer types could be purchased in Reykjavík’s liquor stores. Soon, beer became the country’s most popular beverage, out of which lager beer reigned supreme. However, other types have become increasingly popular. In recent years, Icelandic micro-breweries have been popping up all over the country. However, as of now, alcohol is only available in liquor stores, owned and operated by the Icelandic government.