I didn’t have to think twice when Þóra Sigurðardóttir, the proprietor of Nýp guesthouse in Skagaströnd, invited me on a trip to the shore with marine biologist Karl Gunnarsson and seaweed connoisseur Kuniko Ibayashi, who came all the way from Tokyo. It was meant as a meeting of the minds on the history and uses of seaweed in Iceland and in Japanese cuisine. Ibayashi is known for combining umami—or the fifth taste. A taste originally recognized in Japan—with the cuisines of other countries. And now it was Iceland’s turn.

The tide was out when our group met outside Staðarhólskirkja church at Saurbær on Breiðafjörður bay and headed to Salthólmavík cove. A prominent area for collecting dulse seaweed. Outfitted with galoshes, sacks and snips, we ventured out onto the beach. Which stretched out as far as the eye could see at low tide. But there were only a few hours before the tide came in so couldn’t dilly-dally.

Salthólmavík was one of the wealthiest stretches of shoreline in Iceland as the license to harvest dulse was considered a lucrative endeavor in earlier times. Accounts dating back to 1400 indicate that seaweed was harvested around Eyrarbakki and the Westman Islands. In these areas and Breiðafjörður the tide goes farther out than elsewhere in Iceland, affording greater access to the seaweed.

As Karl braved the beach we followed behind, like a row of ducklings exploring the world for the first time. He stopped to point out any seaweed of interest and we drank in the insight that flowed freely from him. He named the species and their various uses, which to us modern Icelanders has become arcane knowledge.

Karl told us how Icelanders from earlier times dried dulse and ate it with melted tallow. We thickened our porridge with alaria algae and used Irish moss to gel foods. Alaria and dulse were also stockpiled to fodder animals. Livestock was sometimes even pastured right on the beach. Houses were heated with seaweed, which was dried and burnt when wood was scarce. Seaweed was also a rich fertilizer, dense with vitamins and minerals.

“Livestock was sometimes even pastured right on the beach“

Seaweed saved the day for many poor farmers and their families. During lean times they sometimes had access to the shorelines, which belonged to the authorities. Tenant farmers on church land, however, were made to take off several days each autumn to collect seaweed for the church, which generally had license to harvest. Control over the bountiful shoreline caused much bloodshed and strife, but the church often emerged as victor.

Although we don’t consume much dulse these days, the Thorverk algae processing plant was built in Reykhólar in 1984, and there the beach’s bounties are reaped. Today it even has organic certification. About 10 to 15 tons of Norwegian kelp and oarweed are collected from the shore every year with large machines. Dried with geothermal heat and milled. A large portion of the output goes into a material called alginate. A binding agent used in food processing and cosmetics. The rest ends up in animal feed and fertilizer. Karl mentioned that although 10 to 15 tons sounds like a lot, it only accounts for 1-2% of the seaweed around Iceland. The harvested areas are also left to regenerate for three to five years. Which makes for a sustainable process since the forests are only thinned. 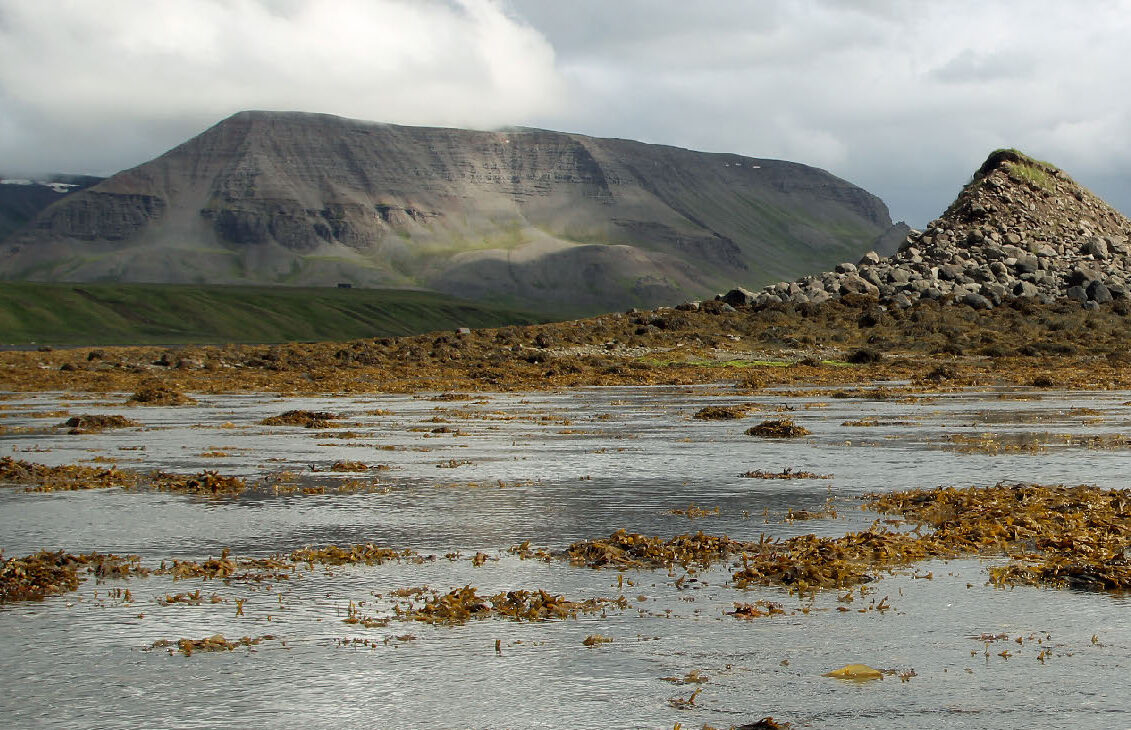 “Karl mentioned that although 10 to 15 tons sounds like a lot, it only accounts for 1-2% of the seaweed around Iceland“

Even if we’ve left our history of using seaweed mostly in the past, there has been new interest and innovation in recent years. Several products now on the market prominently feature seaweed and its unique qualities and nutritional value. Like Una skincare, shampoo from Purity Herbs, kelp tablets from Gullsteinn, sea-sourced calcium made from calcareous algae and seaweed wraps for the skin.
Other products use seaweed’s unique flavor and nutritional value. Like kelp salt from Urta Islandica, dulse sauce from Hollusta, and you can’t forget those who recognize the aesthetic quality of seaweed like bladderwrack-inspired necklaces.

The tide was coming in and it was time to head back to Nýp to admire the treasures taken home in our sacks. There waited Kuniko Ibayashi, a chef originally from Hokkaido, Japan’s most important seaweed-producing island in the North Pacific. She began her culinary training in Sapporo, a city renowned for its food. And later moved to New York, where she worked for 34 years, before returning to Japan. We flocked around the delicate, smiling woman in the kitchen where she was holding a cooking demonstration. She taught us about the art of flavor, a key concept in traditional Japanese cuisine. Japanese gastronomy seeks to bring together certain tastes until a perfect balance is achieved in a restrained. Natural way—with a keen eye to presentation 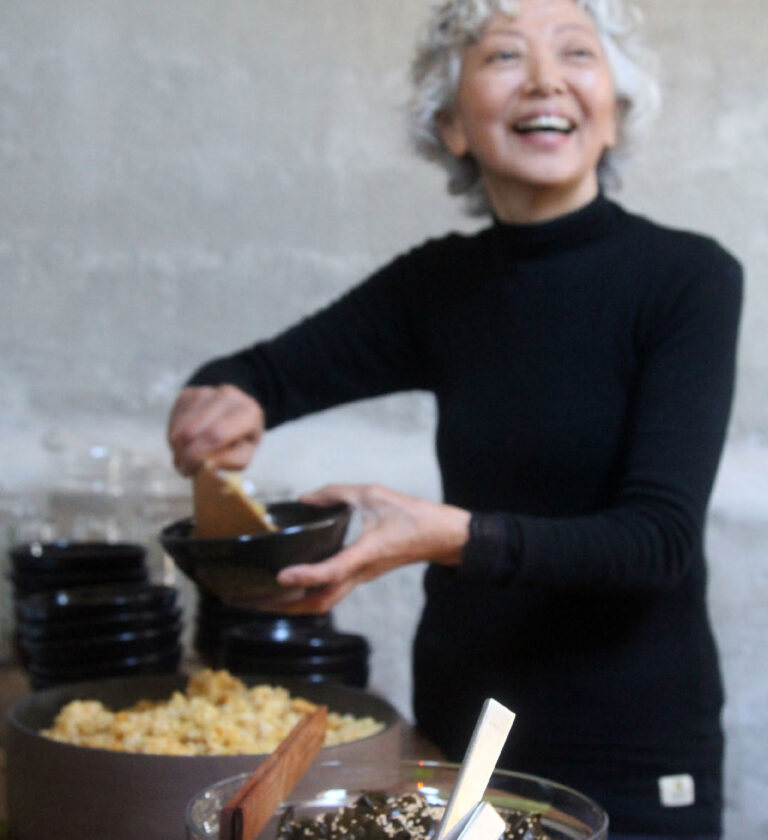 “We flocked around the delicate, smiling woman in the kitchen where she was holding a cooking demonstration“

We began by making dashi, a broth made from sea tangle (kombu) and Japanese bonita flakes. She had us try the broth to taste the flavor umami, which is a fifth taste distinct from sweet, sour, bitter and salty, and was originally recognized in Japan. Ibayashi’s cooking is the essence of umami. She believes one can better experience the individual flavors of fresh ingredients from a certain geographical area when they are mixed in just the right proportion with seaweed. Then she went on to serve up one dish after the next, each presenting an intriguing combination. She crumbled baked, seasoned dulse over a fresh salad with rice, and then roasted dried fish in the oven until it was crunchy and crumbled it over a rice dish with sea tangle. But the big hit was sautéed dulse with sesame seeds. It was a true celebration for the tastebuds brought to you by nature!